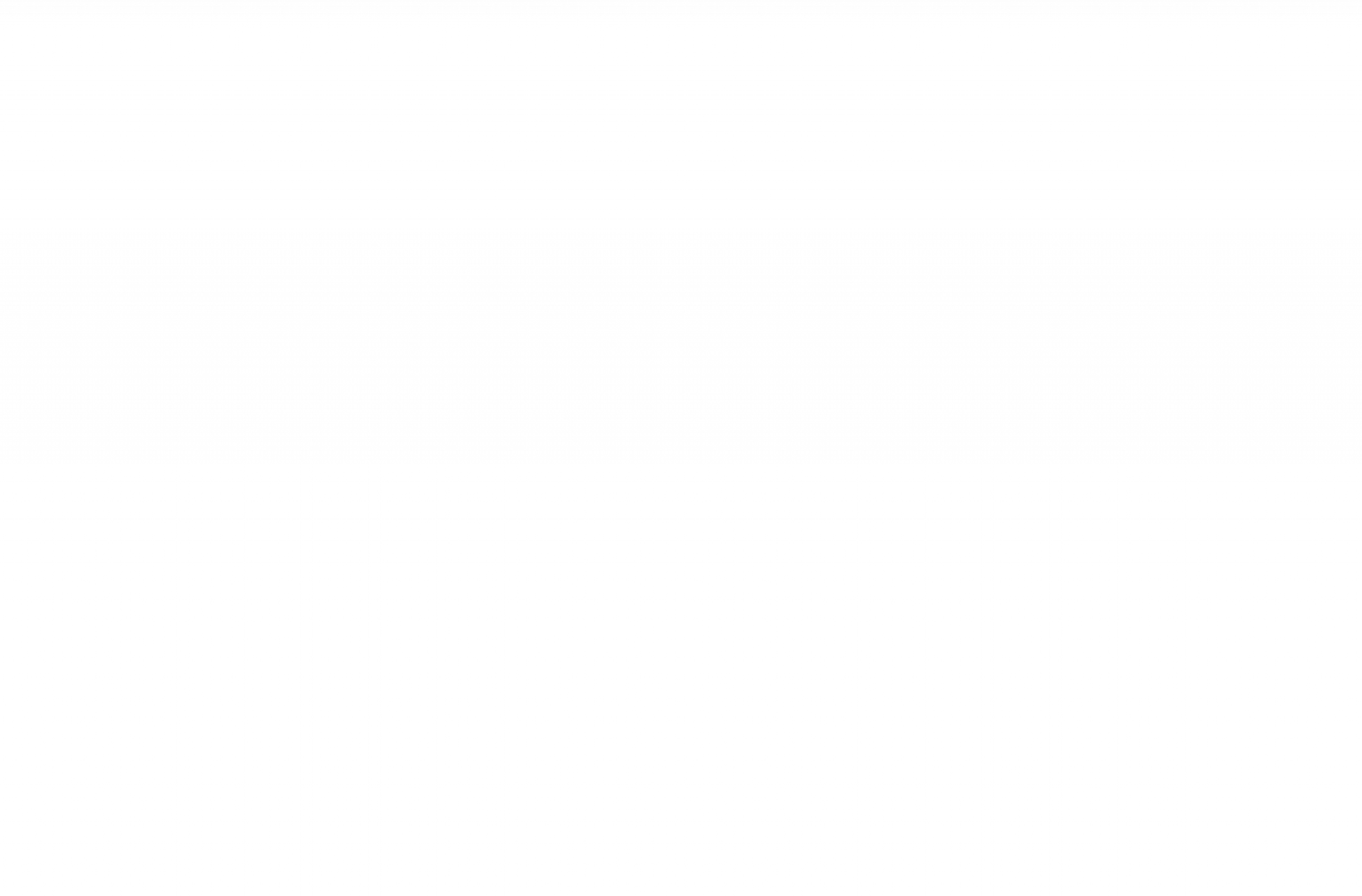 I created a logo affiliated to one of the largest pop culture brands in the world.

While I was endlessly scrolling through Twitter one day I came across a post by Jessica Blevins whom is the manager and wife of Tyler “Ninja” Blevins. The post indicated that Jessica was looking for a new logo for her online brand and she kicked off a contest with her community. Having a fair amount of skills I brushed it off at first. I didn’t take it very seriously largely because I knew there would be 100’s of submissions and engagement. 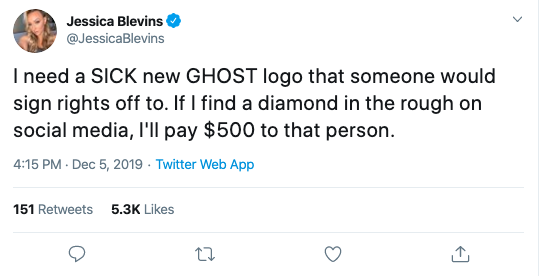 Later that afternoon I thought about it some more and started seeing the entries come through. They didn’t seem all that impressive. They weren’t bad, but I had a feeling that I might actually have a shot at this. A day or two went by and as the deadline approached I finally started on a piece.

Not knowing what I was getting into and with very little to work off of, I started sketching using Procreate on my gen one iPad Pro. I went back and forth through a few ideas and used some inspirational graphics to create the initial shape. After about 6 hours of effort I finished and … I wasn’t very impressed with my work…. but it was 11PM and my window of opportunity was running out. I saw more submissions which were frankly, incredible. It seemed clear to me that Jessica was looking for something different and iconic.

With great hesitation I sent a description and the image to her via DMs. Not long after, to my surprise, I got a response. 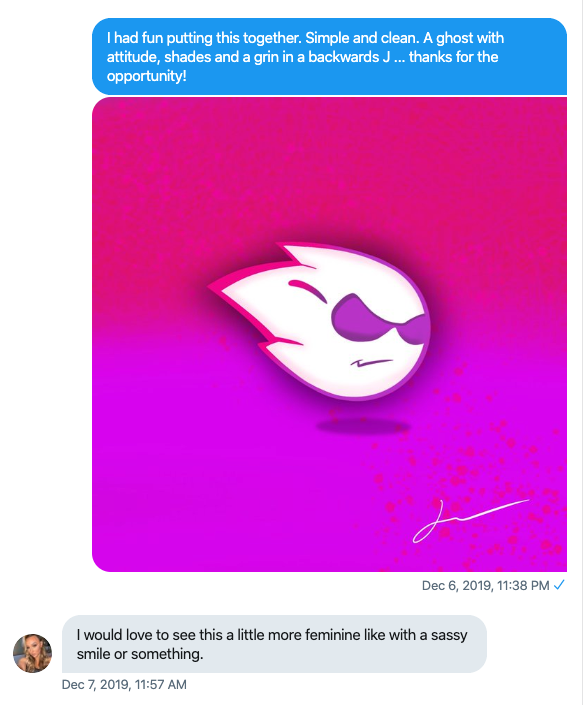 She said that she liked it and requested I give the logo a little more character. At this point there were 3 batches of logos already selected for public voting and I figured it was over for me anyway. About an hour later my logo showed up in a batch people were voting on. My Twitter exploded and I spent the next 4 hours responding to every single person that voted for me. I got some DMs too and some really great comments. I watched the vote and I was getting crushed by DebonairMedia who created a really great concept. I received thousands of votes and despite Jessica’s earlier request, I humbly threw in the towel. Not because I was giving up, but because I was so freaking blown away. 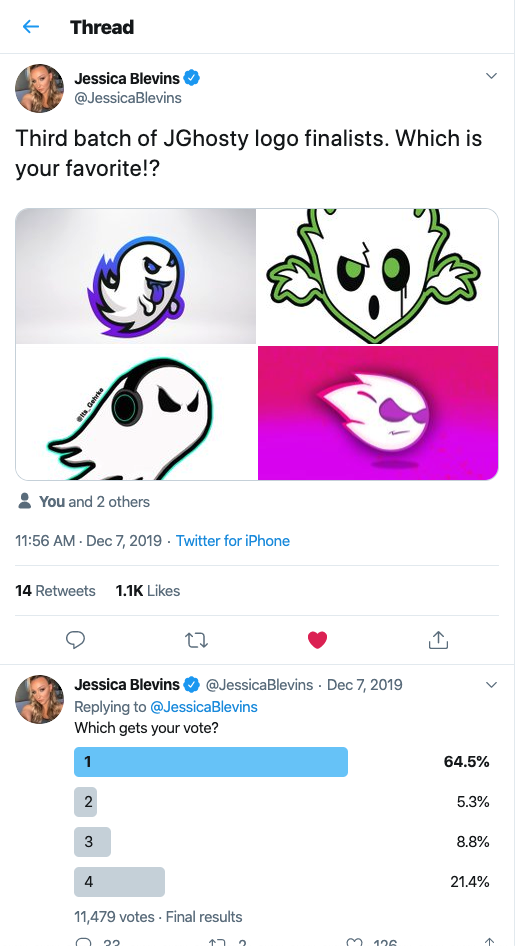 It’s now night time and I’m really starting to chew on the comments that Jess sent. While I knew I lost I still felt like I needed to go the extra distance just to feel good about it. For me, not for anyone else. That night I couldn’t sleep and the next morning I woke up at 5am. I hit a coffee shop and worked on an alternate for 5 more hours. At this point not much had fundamentally changed with the logo but it was more stylized and detailed. I swapped the pink for shades of blue and purple and after about 10 minutes of holding my finger over the send button, I took the last step and shared the comp with Jess.

At this point I’m exhausted knowing I had done everything I could and despite not winning the votes I was proud of myself for seeing it through to the end. I felt like I kept my unspoken word. I closed down my tech and sat silently watching traffic drive by the window. It hand’t been more than 10 minutes when my phone buzzed showing me that I got a DM from Jess. I didn’t open it at first because I figured I missed the mark and thought I might get eviscerated 😀 …. The result was quite the opposite. 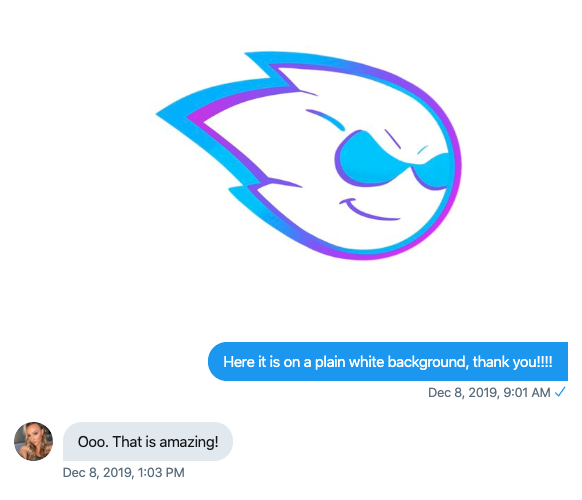 Jessica’s message read “oh this is amazing” …. I was blown away once again and that was it for me. I completed what I set out to do and what kept me up at night. I called my wife, texted my dad, my brother and everyone else I knew. I was so excited. I cried tears of joy right there in the coffee shop.

As a creative you’re largely fighting to be “relevant” on a regular basis and I’ve struggled for years to break out of the confines of my normal grind to show friends, family and others that I was exactly what I had always wanted to be, a respected creative….and here I was doing something for one of the largest brands in the world.

I packed up and went home. I went about my day while still responding to Twitter comments and messages. My phone had to stay plugged in because of all the activity 😀 that same day my phone blew up again…. and let me tell you, there’s nothing quite like seeing “Jessica Blevins has tagged you in a post” pop up on your phone…and now it was the 2nd time. It also wouldn’t be the last. This time though, it was because I was included in the FINAL ROUND OF LOGOS!!!!!! Even though I wasn’t the highest rated out of the 4 batches of 4 logos I still made it to the final round… 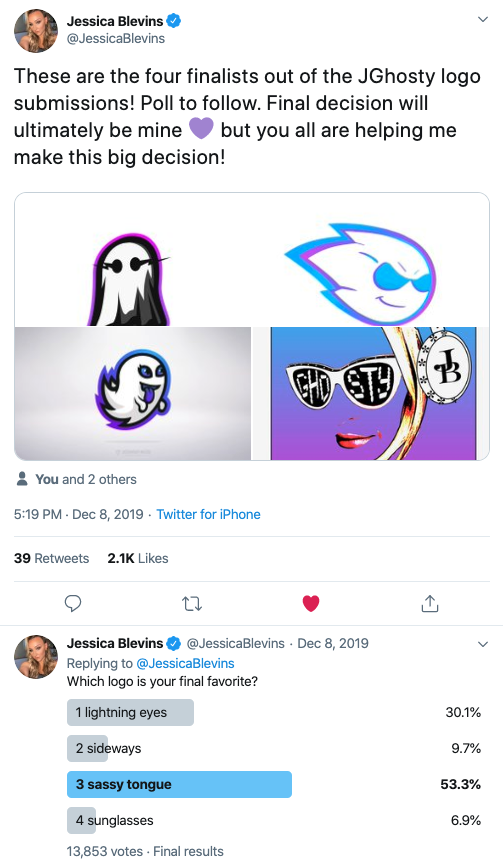 …and it was all because of the extra effort. The new logo and my additional commitment is what it took.

So now here I am, in the FINAL FOUR out of 100’s of submissions, I’ve been tagged twice, received hundreds of comments, THOUSANDS of votes, DM’s with Jess and so much more. Time passed and I placed 2nd in the final round with a total of 4,500 votes across two rounds. I was blown away AGAIN by the support. 4,500 of you believed in me and that’s incredible.

It was Monday now and the vote was nearing a close. Early in the morning my phone buzzed again and it was a DM from Jess. I didn’t know what to expect, but what I found sent me around the block and weeping. Her message simply read (summarized), “though you didn’t win, Tyler (Ninja) liked yours the best.”

Are you kidding me?

ARE YOU KIDDING ME?

Yeah that happened and that’s mine you know? That can’t ever be taken from me. I have that level of credibility. If Ninja was choosing a logo for himself out of the batch, it would have been mine….it’s just nuts. The whole time I’m sitting over here in the midsize city of Vancouver, WA living in an apartment and hitting a coffee shop to jam out something I had no idea would even work.

Some time later, Jess then wrote a tweet ABOUT ME specifically and sent it to all her followers. I don’t even know what I did to deserve this. I just tried to do my best, I wanted to be myself and just do good work. 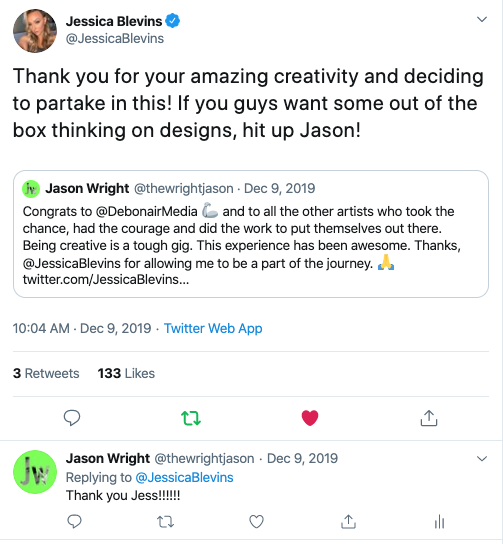 Thank you Jessica Blevins for the opportunity. Congrats to DebonairMedia for crushing it! Seeing the logo up in various digital and physical formats is mind-blowing….especially knowing I was pretty dang close.

…and a special thank you to HalieAtiSuto whom, through her creative work, has inspired me to double down and get back to doing what I love. And, I greatly appreciate her entertaining me by reviewing various designs and things I’ve sent her way. Had I not continued down the path of doing creative work I would have never had a shot in the contest to begin with. Period.

I want to be all-time great, but damn, I feel pretty great already.

You can view addtional images under the portoflio entry. 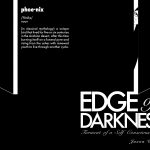 The Journey to the Edge of DarknessBlog, Personal 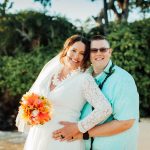 Looking Back On Achievements and Struggles from 2019Blog, Personal